So I'd better start off defining what empowerment is. You hear about this in the press a lot, but we define it pretty simply: empowerment just means that your employee can say, "I have everything i need to get the job done." Now it's management's obligation to provide the components so that the employee they've hired to do the job can actually do the job.

Now, some organizations will have pretty high empowerment, in which case you don't have to do this, or you do this to check every once in a while and you move on towards engagement. But many organizations are going to have to work on empowerment first because if you don't have good empowerment, if people can't come in and say they can get the job done, talking about the next level up "engagement" is probably going to make you seem rather foolish. So you need to start at the lowest level that needs work. 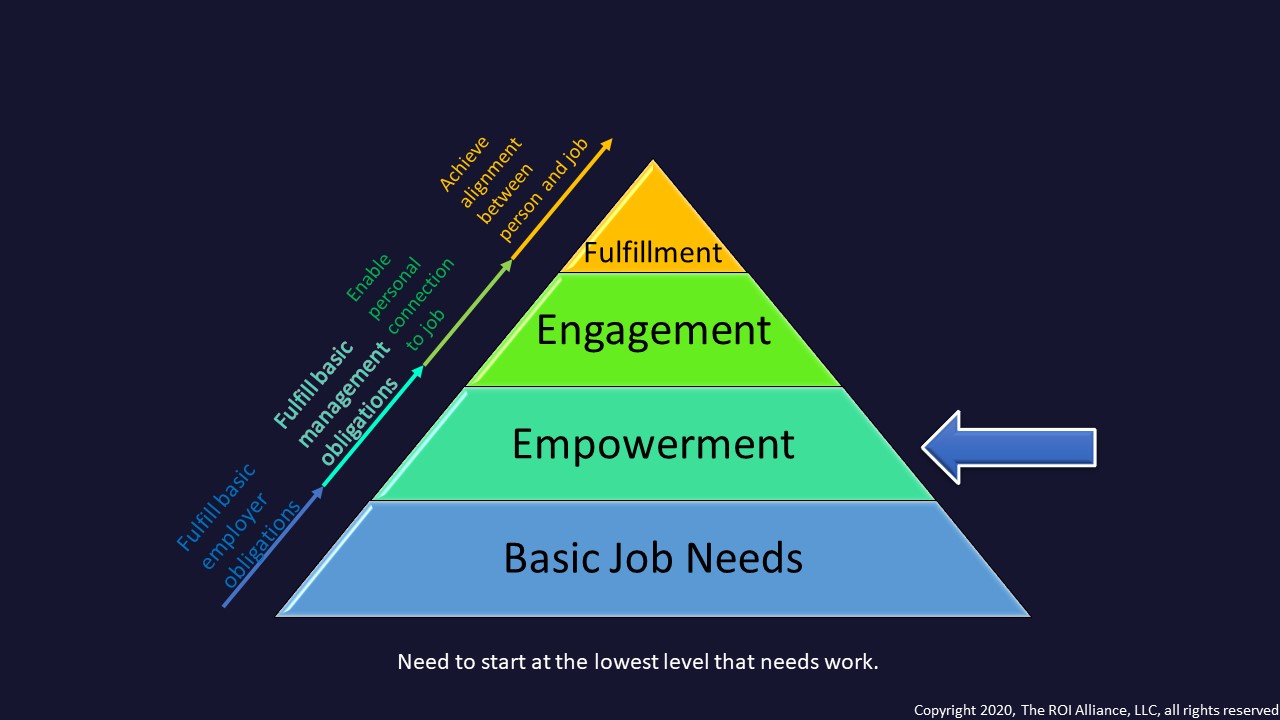 How do we go about doing this? Well until somebody invents an app where you can scan somebody and ask them with this app if they are empowered, we're probably going to have to ask them questions and that probably means a survey. So there's an online survey that your employees would take to where they would answer certain questions to make sure that they are in fact empowered, starting off with an overall

Once that is done, we come back with an analysis.

Now here's one piece of that analysis. 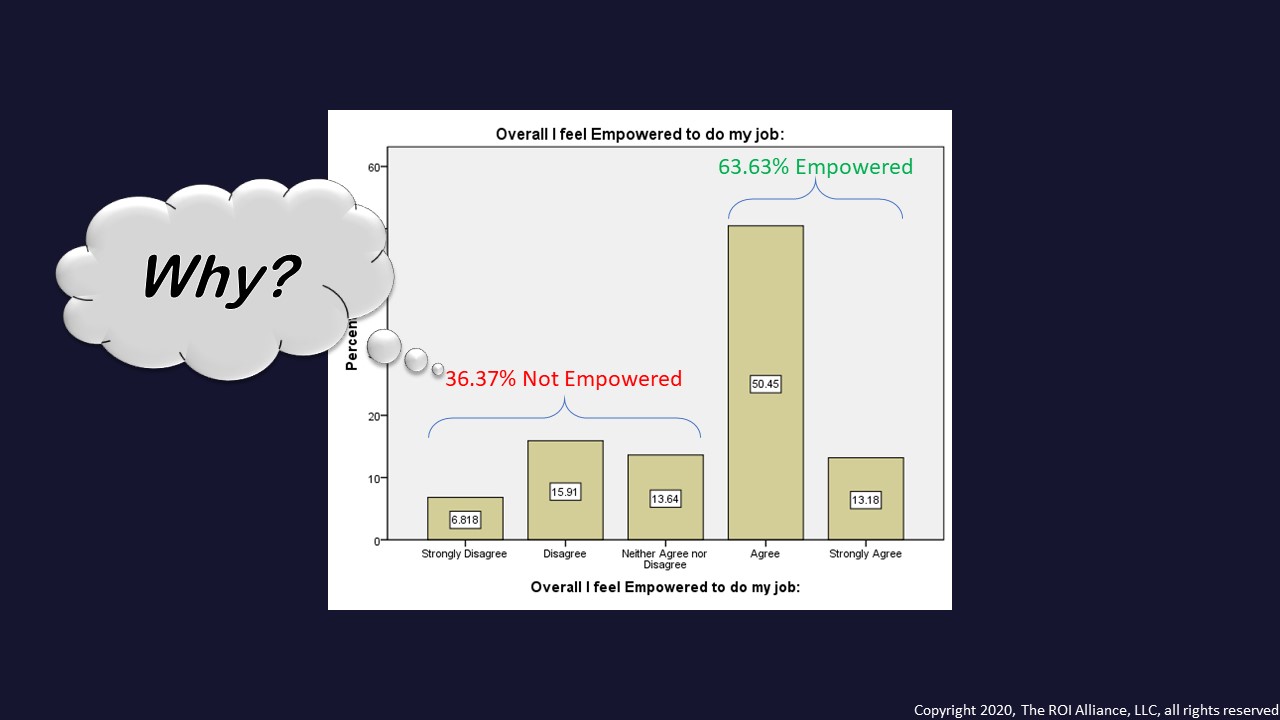 Of course the first question that you as a manager are going to ask is "Why is that?"

Well to the naive person, it might seem that you would just go into the graphs and find out which graph was the worst, but that's not the way it works. What we do is something called a CHAID analysis. A CHAID analysis tries to find out how people in answering one question influence or associate with how they answered another question. 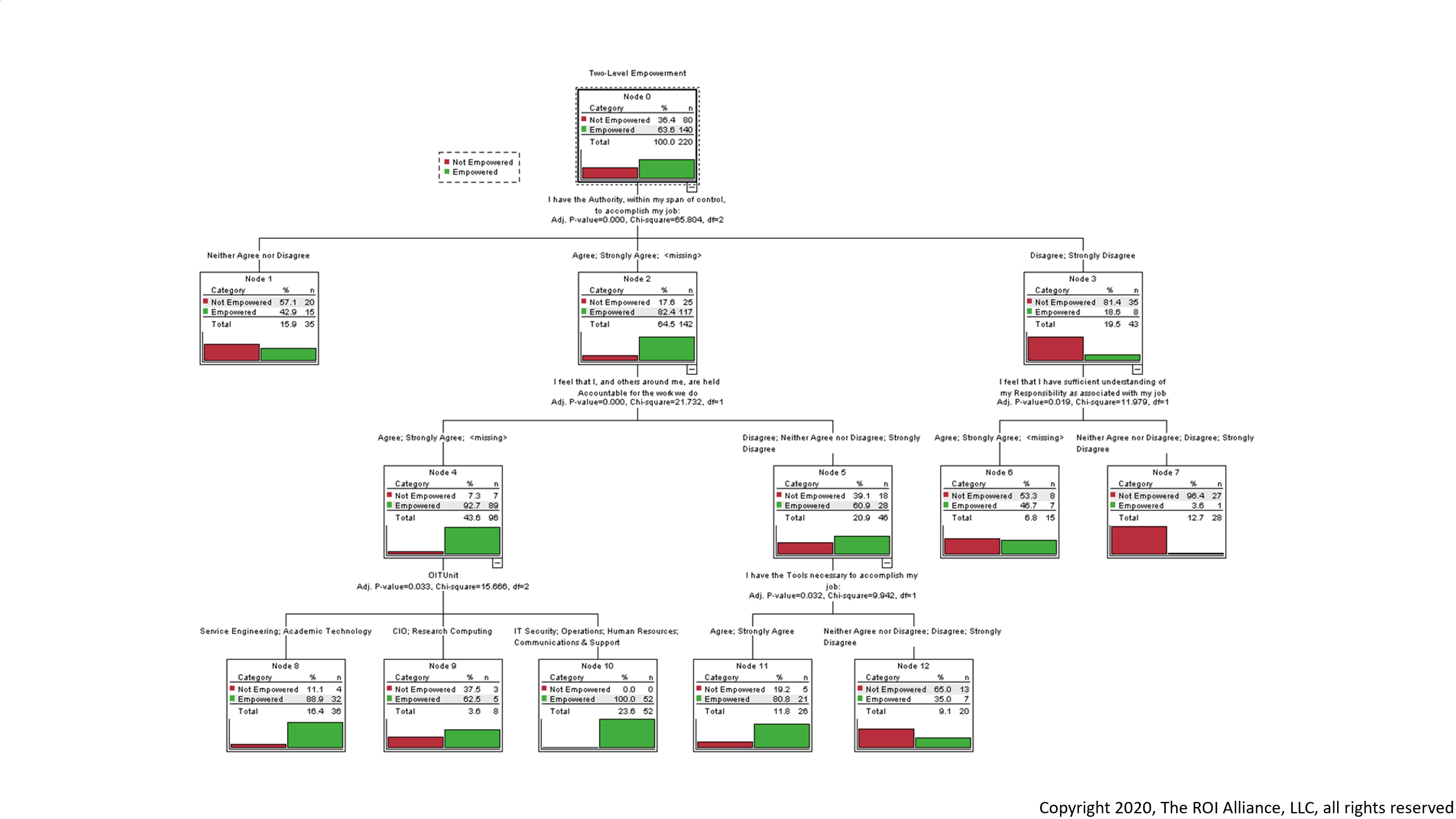 So, in this case i'm interested in how they answered the being empowered or not questioned and i'm looking across all the other questions that we ask them to see if there are any relationships that show up there.

Let's zoom in on that top one and take a look at what that's showing us.

Now look at the results here on the right hand side.

Now look at the results here on the right hand side.

We have people who disagreed or strongly disagreed that they had authority and look at that about 81.4% of them also said they weren't empowered. What this analysis has identified as a potential area to work is authority.

If they say that they neither agree nor disagree that they have sufficient authority within their span of control on the left-hand side you can see that's 57.1% who weren't empowered. It's better than if they disagree,but not by much. Then if they agree or strongly agree that they have authority within their span of control, you can see that only 17.6% aren't empowered and 82.4% are.

What this gives is something for the managers to work on in order to improve their employees overall sense of empowerment.

How would you go about doing that? Well, if we zoom in on this authority question and we take a look at how people answered that question, we see that a lot of them were saying they neither agreed or disagree disagree or strongly disagree. 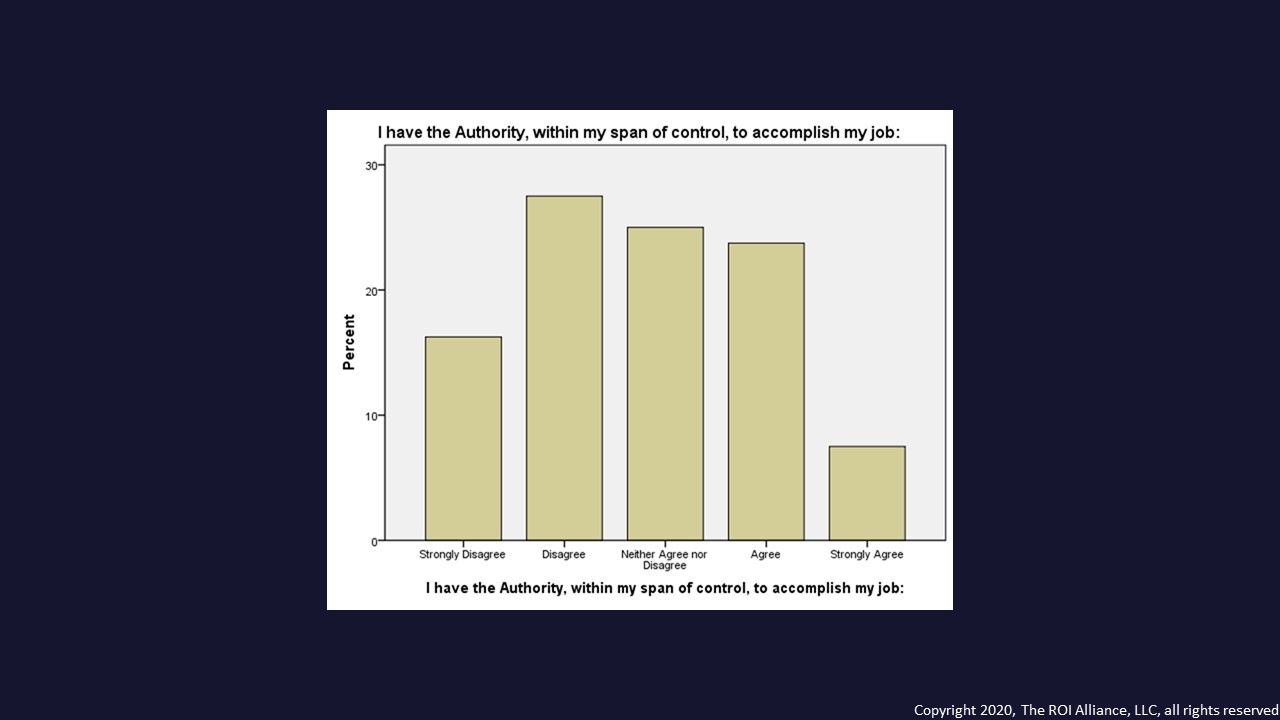 It doesn't necessarily tell me where to work. So the next level down we've asked another question around what barrier within authority do they have to accomplish a job, and now we see that the biggest answer, the highest answer, the mode is multiple parties must be consulted in order to make any decision related to accomplishing my job. 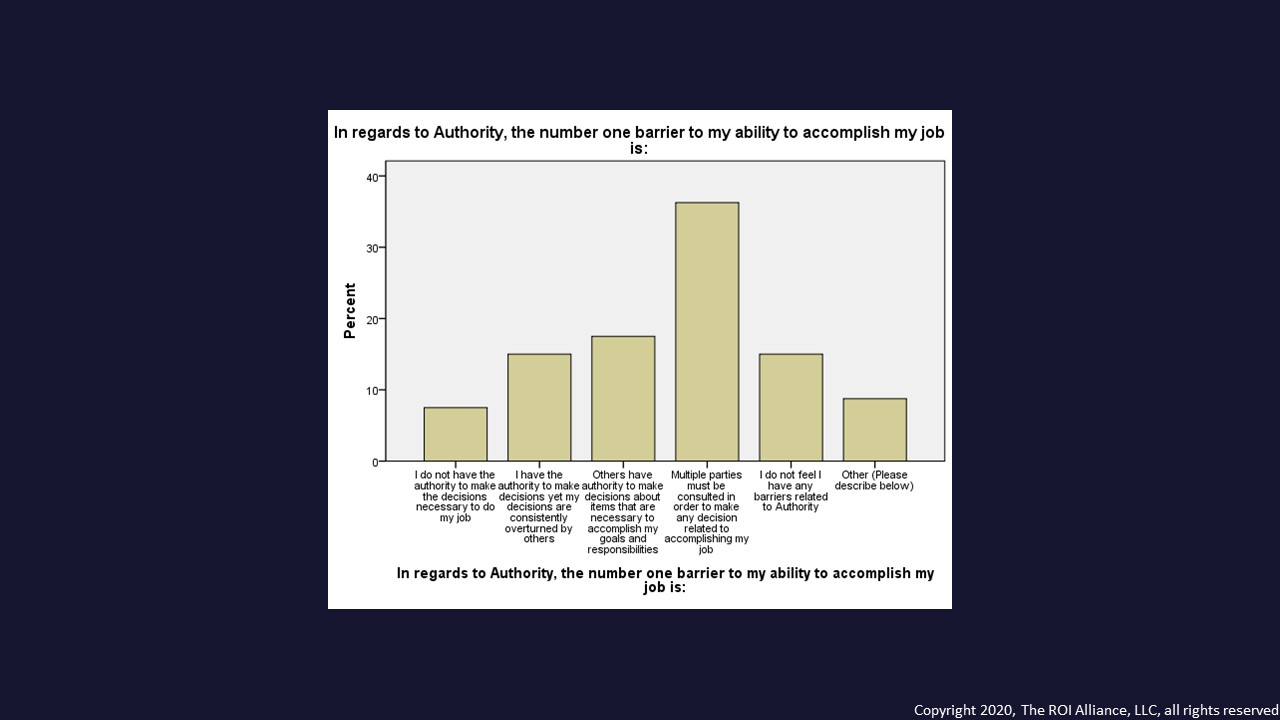 This gives me, as a supervisor, something that i can target to try to figure out to answer the question of why do we have this impression that multiple parties need to be consulted before you can make a decision. And if i can help resolve that, if i can make that part of the of this graph go down, then the  previous CHAID analysis indicates that i'm going to be able to have an effect on my overall empowerment.

So what does this look like after multiple applications of the survey itself?

This is what you can do.

This is an organization that started off with 65.1% of their employees empowered, so about a third of their employees did not feel they could do the job. The analysis that we did that indicated that there was an issue in association with the authority question. So, then the question becomes "What is management going to do about this?"

And then immediately, once it was revealed after the second survey, empowerment popped up to about a
77.7% employee empowerment rate.

The next little tick-up started becoming apparent when we did the analysis for that fourth one, and it turned out that performance evaluations are actually preventing people from getting the job done in terms of who's accountable for what. So we revised how the performance evaluations were done and in turn that resulted in the fifth one at a 92.1% employee empowerment. And if you notice, they kept on going on to 96.6% empowered, which is pretty remarkable in any organization.

So this is what you can accomplish using data in a well-designed survey along with some advanced analytical techniques that we provide. You actually target, measure and then improve employee empowerment.

So if you're interested, please give us a call we can set something up for you. We can help you empower your employees.

One Simple Rule To Control A Business: Emergent Behavior

Thank you! Please check your email and confirm the newsletter subscription.

One Simple Rule To Control A Business: Emergent Behavior

Thank you! Please check your email and confirm the newsletter subscription.