There are a number of barriers that prevent small companies from transitioning to big companies. But it is interesting to see a big company putting itself at risk by acting as a small one.

A number of years ago, one client of mine was considered the best in the industry because, by the President’s own description, “we don't suck as much as our competition.”

This industry was plagued by poor design quality, poor manufacture quality, and poor customer service. By the way, it is also an industry that every one of us depends on daily for infrastructure.

The relevant part of their story is that a couple of years before, they had been hit by one of their suppliers providing components that would fail, not on install or test, but after six months to a year in the field. Now these assemblies were intended to last for decades, so you can understand how hard this hit their customers and, consequently, the company’s sales and profits.

After a lot of work, they tracked that failure down , but at that point they had lost multiple millions of dollars directly, for replacement costs, and an unknown amount indirectly, due to potential lost business.

Unfortunately, the supplier of the faulty part was pretty much the only one that could supply it, so they didn’t have the choice of just buying it from someone else.

Their reaction at the time was to institute a 100% inspection regime for the incoming product.  But here is where we start to go off the rails.

First, they already knew that the part didn’t fail unless it was in the field for some time, so there was no test they could perform to determine if the part was good or not. The inspection consisted of a human looking at the part. I am just guessing here, but the reasoning seemed to be that if the supplier knew they were inspecting it, they wouldn’t make the error on their side that lead to failure. I’ll leave as an exercise for the reader how effectively this changed the supplier’s process.

Second, this 100% inspection was instituted as a permanent fix on the problem. Even if human inspection could identify the failure in this case (which it obviously could not), lots of studies show that human inspection is a really terrible way to try to control anything. People can’t concentrate 100% all the time, especially with a low probability of finding something. Further, incoming inspection is non-value added. It is suppliers who should be responsible for ensuring their own quality. Paying people to look at incoming parts is a waste of money in the long term.

But here is where it gets even worse. My client had just hired a Quality Assurance Manager. Now, in my world the term “Quality Assurance” means that you have built systems to eliminate defects and reduce variation so that you never have anything that is defective or an out of spec. Part of Quality Assurance must be to ensure that the inputs into your process, what your vendors supply, allows your process to maintain its quality. Accordingly, she and I talked about how to institute a supplier quality assurance (SQA) system.

Here is the model of SQA that we advocate: 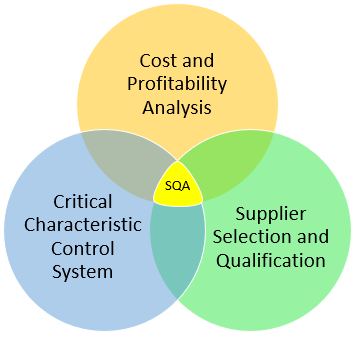 Supplier Selection and Qualification consists of evaluating potential suppliers’ systems and processes to determine if they are capable of creating high-quality products or services. The actual performance is monitored over time as well.

Critical Characteristic Control System is work by the purchaser to determine what characteristics of the supplied products are needed for the final product to meet the final customer’s requirements, and to communicate those requirements to the supplier. This is done with data and experimentation if at all possible to test those requirements. I have often seen “requirements” enforced for years, driving up costs, that had nothing to do with anything important.

Cost and Profitability Analysis is a living cost model to determine the true costs incurred by the purchaser associated with using that particular supplier. This allocates costs incurred by the purchaser to prevent and detect nonconformances as well as the costs of poor quality and failures and including lost final customer business. This gives you a realistic idea of what a vendor costs you that goes beyond the price you see on a PO.

This is solid work for a QA manager, and she was very excited to get to it. It starts to put in place systems to really understand what is going on with your vendors. In many of my clients, it also leads to the purchaser bringing in suppliers for training at their site because the better they understand and run their own processes, the better it is for the purchaser. These three elements of SQA really highlight that.

But here is where a big company started thinking like a little one. We proposed this effort to management, but the Director of HR objected, saying that there was no time for the QA Manager to do this. He had just hired her on as the QA manager and they needed someone on the docks looking at the incoming product, and that someone was her.

Think about that for a moment: they had hired someone who was probably getting salary and benefits somewhere north of $200,000 and were treating her as an inspector, when the real value of that position was the prevention of problems. On top of that, they already had data that a difficult-to-detect problem with their supplier could cost them millions of dollars, so work to prevent such occurrences could result in a huge cost avoidance.

I mentioned all this to the HR Director and asked if we really needed someone on the dock, couldn’t they hire someone for a lot less than a QA Manager to stand there and look at packages?

He said that there was no way he was going to authorize another FTE (full time employee) for that, since he had just hired the QA Manager!

Thinking small is choosing not to spend maybe another $100,000 in order to free up the QA Manager from non-value-added work in order to prevent the next multi-million-dollar disaster.

What happened to the QA Manager? She left after a few more months, since it was clear that she was not a QA Manager at all, and I can hardly blame her. Of course, the company lost a person who could have prevented that and other disasters due to supplier quality.

Maybe they hired that new inspector instead.