This is the second paper by Dr. Luftig, explaining how to use Total Asset Utilization and a cost allocation scheme to understand the true profitability of your products and/or services.

This article is intended as a continuation of Total Asset Utilization (TAU): An Overview of a Productivity Metric for Profitability Enhancement and Focused Cost Reduction the calculation of which is the first step in assessing the true profitability of a current Customer/Product portfolio. In this article, we will explore how TAU data may be employed to:

In order to illustrate these methods, we will utilize a limited (but actual) data set for a manufacturing firm selling a mix of four products (four alloys of steel or aluminum, or four types of bread products, for example) to three customers, all produced on a production line at a single manufacturing facility. The data set has been limited in this way so as to illustrate the basic steps associated with the CPR process. In actual applications, the steps that follow may be employed in exactly the same fashion as detailed (but with admittedly more complex analyses and results). Table I illustrates the current state of the sample firm’s portfolio, based upon a year of data, which is typically aggregated and summarized monthly. For this reason, the sample size of the data sets illustrated contain n = 12 cases or sets of observations. For this Table, the data in each Customer x Product cell may be interpreted as follows:

A few observations are in order related to these data, before reviewing the complete Table.

The complete data set utilized to provide a baseline for the CPR analysis appeared as follows.

Table I - Description of the Current Portfolio

As shown by the data in Table I, the average monthly profit generated from this portfolio is $4,640,378.60. The next step in the CPR process is to determine the major source of variability associated with the Average Monthly Profit/Unit generated by each product and customer in the current mix. Treating the monthly data as a random sequence of  n = 12 observations, a Two-Way ANOVA[3] is conducted using SPSS for Windows. The results appear as shown in Table II. 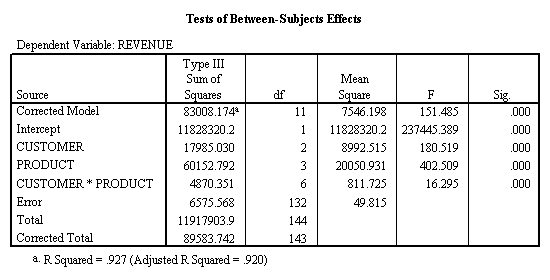 As shown by this table, the majority of the variability in the model associated with Revenue is a function of the Product category (refer to the MS column, which represents variance). In fact, 66.94% of the variability in Revenue ( ω2 ) is directly associated with the Product sold[4].  Although there is a significant interaction between the Customer and Product sold, this effect is only 5.10% of the variability observed. It makes sense in this case, therefore, to concentrate our portfolio improvement (for profitability purposes) on the Products we have chosen to sell. Illustration I, below, provides a visual display of these data, showing why the analysis resulted in the Product category yielding the most promising opportunity. 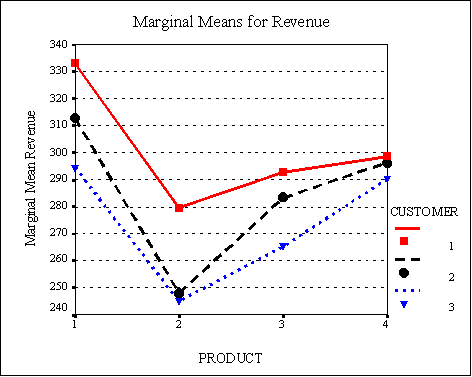 The next step is to conduct a second Two-Way ANOVA, with the Average Monthly TAU indices as the dependent variable. Table III presents the results of this analysis. 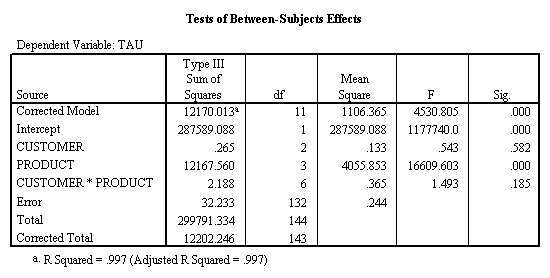 As shown by the data in Table III, ‘Product’ is the only variable reflecting significant differences in monthly Average TAU indices. Illustration II, which follows, presents a visual depiction of these data. 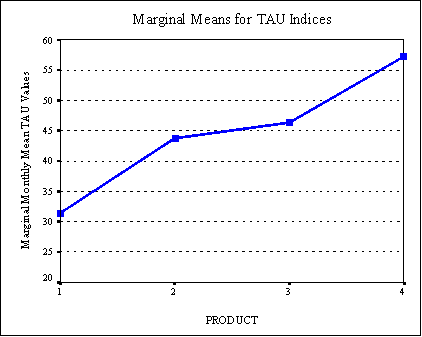 The third step in the CPR process is to determine those components of the TAU model which serve as predictors for productivity (simply measured at this point in terms of the number of Units produced), within each Product group (‘Units’). These data would have been collected and aggregated during the period of study preparing for this analysis. As described in the previous article, it would not typically be expected that (a) there would be a significant and important statistical relationship between TAU and Units; and (b) the same regression model would be serviceable for predicting productivity across all product groups. Table IV reflects the results of this analysis. 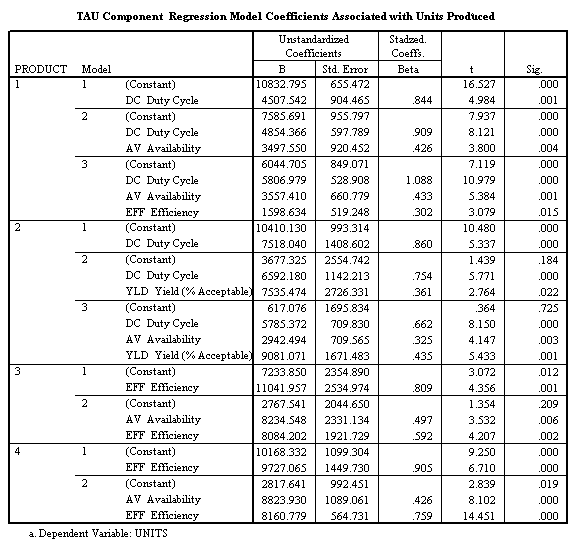 As shown by the Regression data, the models that would predict productivity as generated from the TAU database vary significantly. While Duty Cycle, Availability, and Efficiency (in that order) would be used to predict Units for Product 1, for example, only Availability and Efficiency (respectively) would be used in conjunction with Products 3 and 4. Further, Yield is a significant component only in conjunction with Product 2, reinforcing the observations related to Quality presented in the first article.

The next step is to utilize the individual regression models to predict the number of units that would be produced at the current TAU levels, and at the current Customer mix, if only that Product were to be manufactured. Utilizing the principles stated in the first article for these calculations, Table V presents the results of this exercise, including an estimate for potential monthly profit using current average invoice (Revenue) levels. The profitability of each Product has been generated for both the observed component mean values, and the M.O.E. (Moment of Excellence) values for each component within each Product. The result of the ANOVA over the TAU data allows us to use a single prediction model for all Customers within each Product category. Had this not been the case, differentiated models would have to be generated and deployed.

* The measure of productivity used by the firm

The steps we have employed in illustrating a CPR analysis to this point are as follows:

The potential portfolio analysis reveals a number of interesting observations, which would not normally have appeared as intuitively obvious when simply inspecting the descriptive data in the previous tables.

Finally, the following observations may also be advanced:

Dr. Jeffrey T. Luftig is a Senior Instructor in the Management Division of the College of Business at the University of Colorado, Boulder, Colorado. Dr. Luftig has also authored a number of textbooks and articles on the topics of Business Performance Improvement, the Quality Sciences, and Experimental Design.

[4] The statistic ‘omega-squared’ ( ω2) allows for the estimate of the importance, rather than statistical significance, of  each effect in the ANOVA model as a function of explained variability. The general formula for this statistic is: